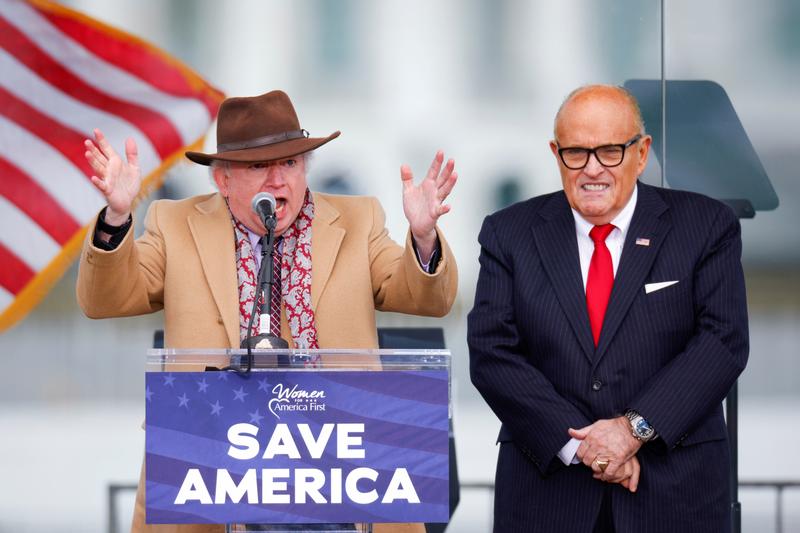 (Reuters) — President Donald Trump may hire a law professor who spoke at his rally before the riot at the U.S. Capitol to help defend him in an impeachment trial over a charge that he incited the violence, according to two people familiar with the matter.

FILE PHOTO: Law professor John Eastman, next to U.S. President Donald Trump’s personal lawyer Rudy Giuliani, gestures as he speaks while Trump supporters gather ahead of his speech to contest the certification by the U.S. Congress of the results of the 2020 U.S. presidential election in Washington, U.S, January 6, 2021. REUTERS/Jim Bourg/File Photo

John Eastman, who joined Trump’s personal lawyer Rudy Giuliani on stage at the Jan. 6 rally, is being considered for a role on Trump’s defense team, the people said.

Giuliani, 76, who told the crowd they should engage in “trial by combat,” may lead the impeachment defense, Reuters reported on Sunday, citing a source. Giuliani has not responded to requests for comment.

Eastman, 60, who made unsubstantiated claims of election fraud at the rally, would neither confirm nor deny whether he will represent Trump, citing attorney-client privilege.

Asked whether he would be willing, Eastman said: “If the President of the United States asked me to consider helping him, I would certainly give it consideration.”

The White House did not immediately respond to a request for comment on Eastman and has declined to comment on Giuliani.

The U.S. House of Representatives on Wednesday made Trump the first U.S. president to be impeached twice, charging him with inciting an insurrection as lawmakers sought to certify President-elect Joe Biden’s victory in the Nov. 3 election.

At the rally, Eastman, who until Wednesday was a professor at Chapman University in California, spoke about “secret folders” of ballots used to defraud the election before Trump took the stage and repeated the discredited claim that the election was stolen from him.

Faculty members and students, among others, subsequently called for Chapman to fire Eastman. In a statement on Wednesday, the university president said an agreement had been reached under which Eastman would immediately retire from Chapman.

Eastman told Reuters he did not believe he did anything wrong. He does not think Trump has culpability, either. “None, whatsoever,” he said.

Eastman came under fire last summer for an op-ed he wrote in Newsweek that questioned whether Vice President-elect Kamala Harris was eligible to serve because her parents were not U.S. citizens or permanent residents.

Trump may have a tough time retaining legal talent. He has had trouble hiring lawyers since former Special Counsel Robert Mueller’s probe of Russian interference in the 2016 presidential election, and the widespread condemnation of the violence at the Capitol and pressure from anti-Trump groups may discourage others from signing up.

Trump was impeached by the Democratic-led House in 2019 on charges that he pressured Ukraine’s president to announce an investigation of his rival Biden, but was acquitted by the Republican-led Senate in February 2020.

White House counsel Pat Cipollone, who helped lead the defense effort during the impeachment over Ukraine, is not expected to participate in the latest effort, according to one person familiar with the matter. Cipollone will leave his post on Jan. 20, when Biden becomes president.

Jay Sekulow, another personal lawyer for Trump who played a role during the first impeachment, also is not expected to be involved.

John Yoo, a conservative legal scholar who also clerked for Thomas and worked in the Department of Justice during the George W. Bush administration, said on Wednesday he did not think Trump would want him to represent him.

“I think he committed impeachable acts,” said Yoo, although he added that he thought incitement was the wrong grounds and “the Senate should not convict him.”