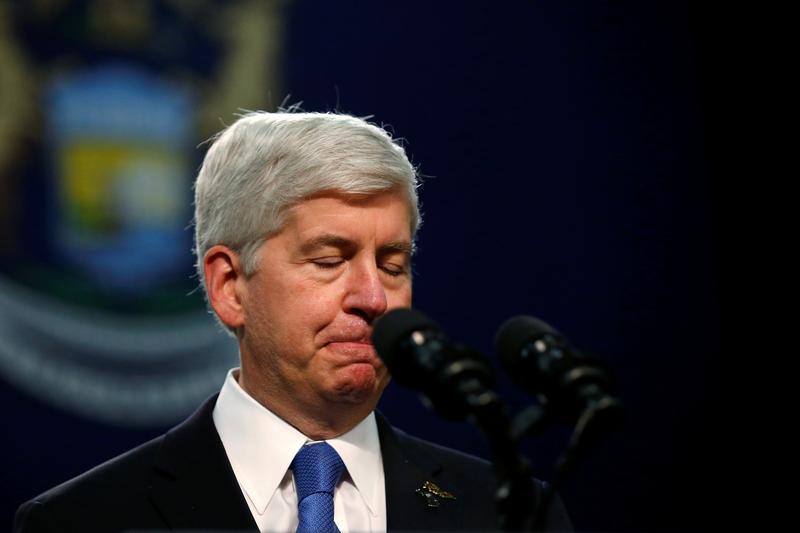 (Reuters) — Michigan’s attorney general charged former Michigan Governor Rick Snyder on Wednesday with two counts of willful neglect of duty over the lead-poisoning of drinking water in Flint city — the first person to face criminal charges over the crisis.

FILE PHOTO: Michigan Governor Rick Snyder pauses as he speaks at North Western High School in Flint, a city struggling with the effects of lead-poisoned drinking water in Michigan, May 4, 2016. REUTERS/Carlos Barria/File Photo

The case became emblematic of racial inequality in the Unites States as it afflicted Flint, a city of about 100,000 people, more than half of whom are African American.

Snyder faces two misdemeanor charges that carry a penalty of up to a year in jail and a $1,000 fine, an online court record showed.

The findings of the criminal investigation into Flint’s water supply will be announced at a news conference on Thursday, the office of Michigan Attorney General Dana Nessel said.

“It is outrageous to think any criminal charges would be filed against Governor Snyder,” Lennon said in a statement Tuesday. “Any charges would be meritless. Coming from an administration that claims to be above partisan politics, it is deeply disappointing to see pure political motivation driving charging decisions.”

Snyder, a Republican, has repeatedly apologized for the state’s poor handling of the crisis.

Flint’s troubles began in 2014 after the city switched its water supply to the Flint River from Lake Huron to cut costs. Corrosive river water caused lead to leach from pipes, contaminating the drinking water and causing an outbreak of Legionnaires’ disease.

The date of the offense was listed as April 25, 2014, the day the city switched water systems.

Snyder, who has been out of office for two years, was governor when the city was under the control of a state-appointed manager in 2014.

Snyder was succeeded by Governor Gretchen Whitmer, a Democrat.

The change in water supply prompted several lawsuits by parents who said their children were showing dangerously high blood levels of lead, which can cause development disorders. Lead can be toxic and children are especially vulnerable.