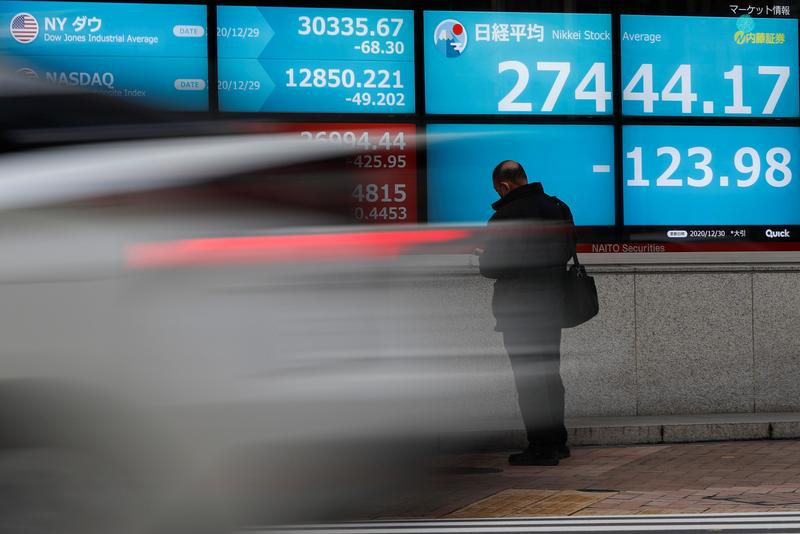 SHANGHAI (Reuters) — Asian stocks scaled to record highs on Thursday as investors were hopeful the incoming Biden administration will be able to secure passage of a massive new stimulus package to cushion the economic damage of the COVID-19 pandemic.

FILE PHOTO: A man stands in front of a screen displaying Nikkei share average and the world’s stock indexes outside a brokerage, amid the coronavirus disease (COVID-19) outbreak, in Tokyo, Japan December 30, 2020. REUTERS/Issei Kato

Republicans in the U.S. Congress have indicated they are willing to work with President Joe Biden on his administration’s top priority, a $1.9 trillion U.S. fiscal stimulus plan, but some are opposed to the price tag. Democrats took control of the U.S. Senate on Wednesday, though they will still need Republican support to pass the program.

But after record high closes on Wall Street Wednesday, markets in Asia reflected relief over an orderly transition of power and strong expectations that U.S. stimulus will provide continued support for global assets.

Kay Van-Petersen, global macro strategist at Saxo Capital Markets, said that Democratic control of the Senate “increases not just the probability of more fiscal (stimulus), but the magnitude.”

“That means that this market should be way, way, way higher as a whole and we’re going to get there. We’re entering this regime of even more accelerated asset class inflation,” he said.

MSCI’s broadest index of Asia-Pacific shares outside Japan touched record highs and was last up 0.92%, with markets across the region posting gains.

Japan’s Nikkei was up 0.82%, less than 1% off three-decade highs reached last week.

The rises in Asia followed fresh record highs on Wall Street overnight. The Dow Jones Industrial Average rose 0.83%, the S&P 500 gained 1.39% and the Nasdaq Composite added 1.97%. On Thursday, e-mini futures for the S&P 500 ticked up to new records, and were last 0.34% higher.

“The market is still taking a sanguine view to tighter regulatory/tax risks given the narrow Senate majority, while still expecting additional fiscal stimulus,” Tapas Strickland, an economist at National Australia Bank, said in a note.

Tech shares stood out after Netflix Inc said it would no longer need to borrow billions of dollars to finance its TV shows and movies, prompting a near 17% surge in its shares.

Along with Netflix, the rest of the FAANG group, scheduled to report results in the coming weeks, rallied. Google parent Alphabet Inc rose 5.36%.

As equity gauges rose, U.S. stimulus hopes weighed on the greenback, pushing the dollar index down 0.17% to 90.254.

In commodity markets, oil prices eased on an unexpected rise in U.S. crude stocks, though hopes for an economic revival kept losses in check. U.S. West Texas Intermediate crude dipped 0.24% to $53.18 a barrel. Brent crude fell 0.16% to $55.99 per barrel.

For multimedia coverage please open www.reuters.com/world/us in a separate browser