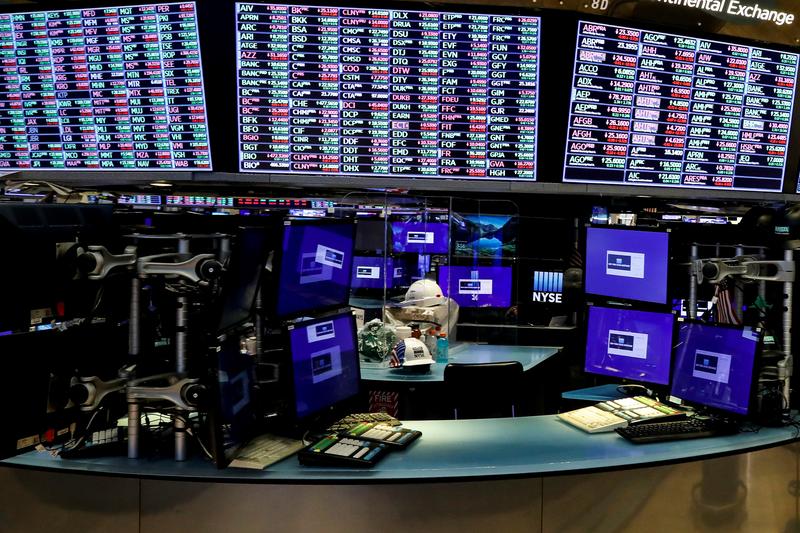 FILE PHOTO: Dividers are seen inside a trading post on the trading floor as preparations are made for the return to trading at the New York Stock Exchange (NYSE) in New York, U.S., May 22, 2020. REUTERS/Brendan McDermid

The MSCI world equity benchmark was flat near two week lows by 0919 GMT, helped by gains in commodity-heavy equity indexes in Asia and a rally in European travel stocks on the prospect of easing social restrictions.

British Prime Minister Boris Johnson set out a phased plan on Monday to end a COVID-19 lockdown in the world’s sixth largest economy.

World stocks had been weighed down in recent sessions by a rapid surge in global bond yields which fuelled expectations that central banks could eventually turn less accommodative in a bid to tame inflation. Tech stocks were among the hardest hit.

Investors now expect Fed’s Powell to be equally reassuring when he testifies before Congress at 1500 GMT.

“If there were already any expectations that Powell could try to calm down rates, then (Lagarde’s remarks) have just further cemented them,” said Giuseppe Sersale, strategist and fund manager at Anthilia in Milan.

Tech stocks and rate-sensitive sectors like utilities in Europe however fell, offsetting stronger travel and commodity stocks and pushing down the <STOXX 600> regional benchmark by 0.6%.

In Asia, the rally in commodities lifted Australia’s S&P/ASX 200 0.9%, while tech-laden South Korea’s Kospi lost 0.3%. Japanese markets were shut for a public holiday.

Nasdaq futures were down 0.6% at three-week lows after high-growth stocks such as Apple, Microsoft and Tesla dragged the index down 2.5% on Monday, while S&P 500 futures inched 0.1% lower.

Bond yields have risen sharply this month as prospects of more U.S. fiscal stimulus boosted hopes for a faster economic recovery globally. However, that is also fuelling inflation worries, prompting investors to sell growth stocks that have rallied in recent months.

“Real U.S. interest rates are now in positive territory, which has created some concern around the consequences for equities markets,” Cesar Perez Ruiz, chief investment officer at Pictet Wealth Management said in a report.

Oil prices jumped by more than $1, underpinned by optimism over COVID-19 vaccine rollouts and lower output as U.S. supplies were slow to return after a deep freeze in Texas shut in crude production last week.

“Oil has been caught up in the broader commodities move higher, with a weaker USD proving constructive for the complex,” ING strategists led by Warren Patterson said in a note.

“Meanwhile, there is also a growing view that the oil market is looking increasingly tight over the remainder of the year”.

In currency markets, the dollar briefly dropped to its lowest since Jan. 13 ahead of Powell’s testimony, while commodity-linked currencies hovered near multi-year highs.